Games of the Week is a series intended to highlight a few games I find interesting across various professional sports. I’ll also include a game of the “weak,” showing off the worst matchups for each sport that I can find, and make some terrible predictions that will unfailingly be wrong. The “week,” for all intents and purposes, will be Thursday to Thursday, so we’re starting with NFL’s Thursday Night Football. This one will be a bit late, which you already know, considering you’re not reading it on Thursday.

For the sake of variety, I’m going to mix up this category as much as possible, because frankly, I could put the Jets here almost every week. They’re favored to lose every game they play this season, and they very well could go down as one of the least watchable football teams in years. I’d rather watch last year’s 1-15 Browns than this Jets team – at least Terrelle Pryor did some fun stuff in Cleveland.

The Jets will open their season against a weird-ass Bills team whose two best receivers from last season, Sammy Watkins and Robert Woods, both now play for the Rams. I like QB Tyrod Taylor quite a bit – I feel he’s one of the league’s more underappreciated players – but it’s hard to imagine Buffalo’s passing game will get much going with rookie Zay Jones starting on one side and stone-handed Jordan Matthews (tied for the fourth-most drops in the league in 2016) on the other. Meanwhile, the Jets are starting Josh McCown.

The only other game that even got consideration here was the Blake Bortles vs Tom Savage showdown in Jaguars-Texans on Sunday, but even that’s not all that close. Jets-Bills is gonna be an offensive abomination, and I pray for anyone subjected to seeing it on local TV.

Player to Watch: LeSean McCoy, who goes for 150 yards and the game’s only touchdown. Who else is gonna score here?

I don’t think this game would have overtaken my actual pick anyways, but this ranking was definitely affected by how sick I am of Sunday night Giants-Cowboys games. Can we get a year off from these? I mean, really.

Regardless, this should be an entertaining game after the hilarious ruling that Ezekiel Elliott will still serve his full six-game suspension, but can totally play Week One first. I don’t think the Cowboys will drop off quite as hard as most people expect without Elliott on the field, but they’ll certainly be happier to have him on hand to face the team that handed them two of their three regular season losses last year. That said, this game will swing much more depending on how the retooled Cowboys defense performs than whether Elliott suits up or not. I think Dak Prescott plays well, but I’m not sure the defense can keep a fairly deep Giants’ offense in check.

[Pre-Publishing Update: Ezekiel Elliott has been granted a temporary restraining order and will likely be able to play all season. The NFL is truly the gift that keeps incompetently giving.]

I guess I can’t be too surprised that the NFL picked an NFC East matchup between two teams for the Sunday night slot over Seahawks-Packers, but this sure seems like a much more interesting matchup to me. Both of these teams have Super Bowl hopes this season, and we have a great quarterback matchup between Aaron Rodgers and a presumably healthy Russell Wilson.

The Seahawks look solid in every phase of the game right now, although the running back rotation of Eddie Lacy, Thomas Rawls, and C.J. Procise could certainly break bad. Meanwhile, the Packers offense should be as explosive as it ever has been, but will the defense (which cost them some games last year) improve enough?

Player to Watch: Russell Wilson, who throws for 320 yards and 2 scores.

[Post-Publishing Note: The expected starter for the Giants has been changed from Blach to Johnny Cueto (7-7, 4.43 ERA)]

The San Francisco Giants are abysmal. They’ve won only 38% of their games and have been outscored by 133 runs as of this writing (only the Padres have been worse). Pablo Sandoval is hitless over his last 37 at-bats and has somehow already cost them half a win in terms of WAR in only 29 games. Eduardo Nunez is hitting like Manny Machado in Boston.

The Dodgers haven’t looked great lately themselves, but they’re still the best team in baseball record-wise, and Clayton Kershaw is going to take his sub-2.00 ERA into San Francisco to face what is barely better than a Triple-A team. Meanwhile, I don’t even know who Ty Blach is. I considered picking the following night’s game because it’ll be on ESPN, but at least Yu Darvish vs Johnny Cueto is a fairly compelling pitching matchup. You just don’t wanna watch this one at all.

Player to Watch: Clayton Kershaw, who fans 11 in 8 innings, giving up no runs.

Not the most exciting slate of matchups this week, but I opted for this game over Sunday night’s national TV Orioles-Indians game because Dylan Bundy vs Trevor Bauer gets a hard “no” from me. The Yankees are the current Wild Card leaders, with hopes of catching Boston in the division, while the Rangers are one of a ridiculous eight AL teams within 3.5 games of a Wild Card berth. Both teams have a lot to play for, as there’s very little wiggle room for anyone in that race right now.

Luis Severino has surprisingly unheralded for a Yankees starter having the kind of season he’s having (fourth among pitchers in fWAR), perhaps because of all the attention on New York’s young hitters. Cashner, meanwhile, is allergic to strikeouts on a spectacular level right now, fanning just under five batters per nine innings. I think he’ll keep it together for this one, though, and we’ll get a well-pitched game, a rare sight in 2017.

Player to Watch: Luis Severino, who strikes out 9 in 7 innings, giving up two runs.

If you’re not aware yet, two teams that are each within 2.5 games of an AL Wild Card spot are going to face each other this weekend and trot out a spectacular starting pitching matchup of Bartolo Colon and Jason Vargas. On one hand, Colon’s combined ERA for the season is over 6.00, and on the other, Vargas has given up 32 runs in his past seven starts. How does this happen?

The Royals have disappointed to an extent this year, but are still hanging around in that annoying way they do, while the Twins are surprisingly holding onto that contested Wild Card spot at present, in large part due to the improved play of young Byron Buxton. This pitching matchup is the marquee, though, because it’s hilarious to me. Seriously – Bartolo Colon vs Jason Vargas.

Hope you’re ready for a whole lot of runs.

Player to Watch: Byron Buxton, who smacks a homer and bails out Bartolo once with a home run robbery in centerfield.

(Some special rules for college football here – I’m only using games featuring at least one team in the AP Top-25 for the current week. Also, I don’t know jack about college football.)

Player to Watch: Who cares?

I don’t know as much about college football these days as I probably should, but I think I’ll enjoy writing this segment because the ranking system makes it nice and easy for me. I did consider Clemson at Auburn here, but I like the major Pac-12 matchup and it could be interesting if these two teams each run the ball as heavily as they did last week. The backup running backs for each of these teams scored a combined five TDs in Week One.

Sam Darnold looked like garbage for most of the game against Western Michigan, and I have my doubts by default about any quarterback named “Darnold,” but I bet USC’s offense bounces back when facing a higher level of competition. That said, I’m still feeling more confident about the team that won by 55 last week. I wouldn’t count on defense being much of a factor in this one, either way.

Player to Watch: Bryce Love, who goes for 160 yards and a pair of scores.

This is a pretty easy choice, as any matchup between top-five teams will generally be. J.T. Barrett and the Buckeyes pulverized Oklahoma in Week Three last year, 45-24, but it’s a new season and Ohio State struggled with Indiana more than they really should have last week. Meanwhile, Baker Mayfield threw one incomplete pass total in Oklahoma’s laughter over UTEP. These teams seem pretty close overall, and both Barrett and Mayfield have been playing college football for what feels like 17 years, so I’m anticipating a well-played game.

I am curious to see how Oklahoma’s backfield develops as the season progresses with last year’s top two backs, Semaje Perine and Joe Mixon, now in the NFL. Abdul Adams (7 carries, 1 catch, 87 total yards), Marcellas Sutton (9 carries, 2 catches, 81 total yards, 1 TD), and Trey Sermon (7 carries, 51 yards) split the bulk of the workload fairly evenly against, but all-in-all, seven different running backs recorded touches for the Sooners (although this is partially due to the rout). If one of them is gonna pull ahead of the pack, a big performance against Ohio State would be a good way to go about it.

Player to Watch: Baker Mayfield, who throws for 350 yards and two scores, rushing for a third. He completes 125% of his passes.

Bonus Nonsense of the Week:

Today, I made friends with the Colorado Rockies! 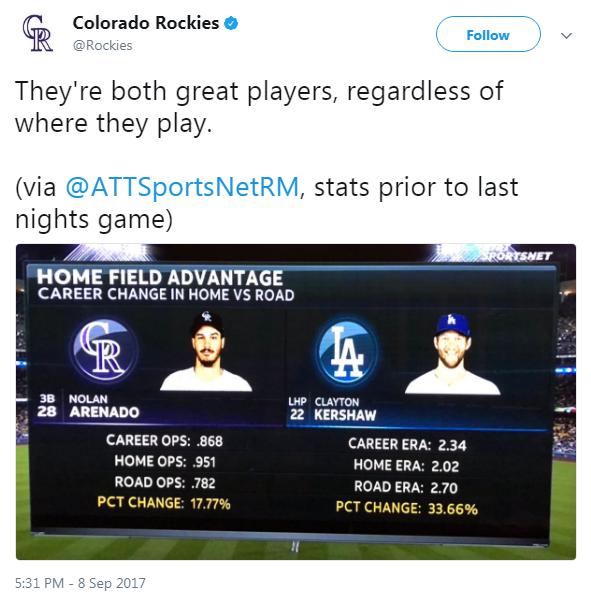 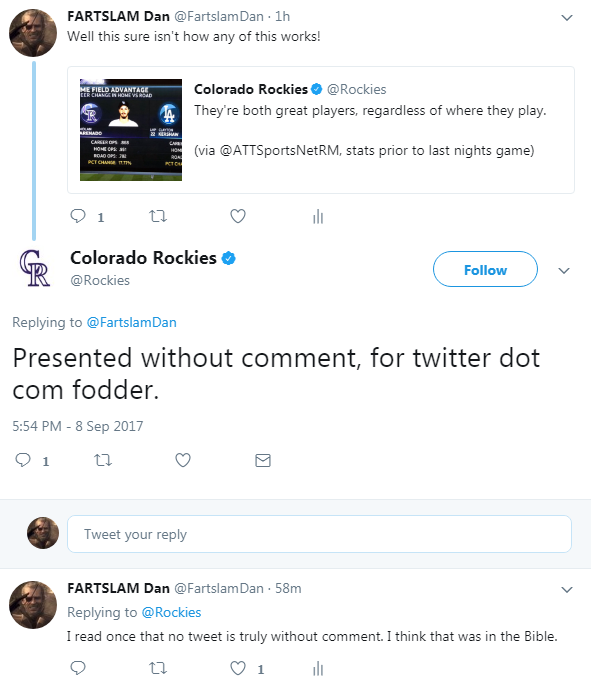